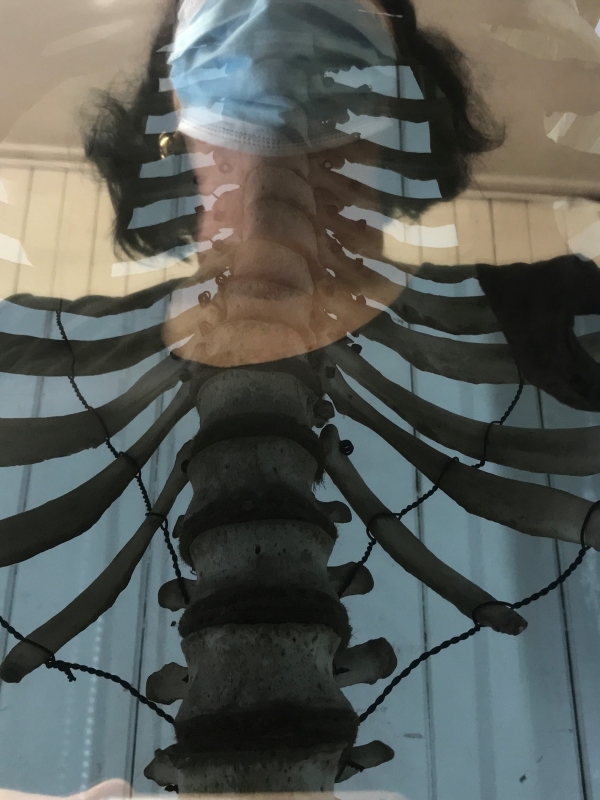 In January, I was Writer in Residence at the Gympie Bone Museum, the guest of Deb and Jaimie.

The residency made me think of connections.

Of the bones I possess. Of the bones of the people and animals I love. Of all the many guinea pigs and dogs and horses and cows and chickens that I have buried about the countryside.

Deb said we do all turn to dust eventually, but our bones are about the last to go.

I was drawn to particular objects,

I stood in front of the human skeleton, and for a moment, with the light just right, the bones and I connected. Of course, it was just the reflection, but that made me think of how the bones in the exhibit reflect us. How we are all linked by the bones we carry within us, or perhaps without us, in the case of exoskeletons.

the 1800s ‘science’ of reading a person’s personality by examining the lumps and bumps upon their head. It is now thought of as a pseudo-science, but it continued to be widespread into the 1900s.  I have a friend who remembers their grandmother saying she was ‘read’ by a phrenologist in a sideshow tent in Queensland.

There is information about phrenology down that wonderful rabbit hole which is the National Library’s ‘Trove’, and you can read old newspapers which have advertisements for phrenology exhibitions. One resource I used when I wrote The Killing of Louisa, was a pamphlet by the phrenologist Sig. P. Besomo who made a diagnosis of Louisa Collins based on the shape of her head. He also advertised ‘Mental Photographs’.

I have my very own china L.N. Fowler phrenology head, albeit a reproduction of the original.

My phrenology head has a few more bumps than usual, owing to an incident with one of the local possums, the one we called Possum McPossumface, who used to like to stroll in through our French doors, if we happened to leave them open, and check out the fruit basket.

After the possum encounter, I glued my phrenology head back together and now he has more pronounced Ideality tendencies, and a crack through his Acquisitiveness and Constructiveness.

He still sits on my desk, his skull a little wonky, and watches me as I write.

Deb knew of my phrenology interest and brought in a human skull for me to handle.

We all recognise what the human skull looks like, from pirate flags and plastic decorations, or in my case, from Yorick, of Hamlet Act 5, Scene 1.

We kind of think we know a human skull.

But when I held it, tipped the real skull upside down in my hands, well, all those intricate bones, all those cobwebs of fine connections.

I could see inside us.

I thought of babies, how beautiful they are, how they grow.

Having a skull to hold showed me things.

Our ear holes are really small.

We are finely made.

Human skulls have bits with great names. The ‘greater wing of the sphenoid bone’ sounds impressive. There are two little holes in our lower mandibles, just around the chin, called ‘mental foramen’, and nerves run through them. I looked the names up on a diagram.

Deb is a scientist, and she was able to explain so many… well ‘wonders’… is about the only word I can use.

I was drawn to so many of the wonders.

I was particularly drawn to the preserved heart.

It is the heart of a sheep, and again, amazing to see such an intricate structure. The process of preserving the heart involves resin and acid and sounded a very complex when Deb explained it to me.

She said small pieces might break off during the process, no matter how careful you are.

I once saw the vein system of a young child, which had been persevered using this technique. It is an image which has stayed with me.

I bought a broken piece of heart.

My piece is dyed black, and sits on my desk with my phrenology head. The piece has prompted a short story, which has become a longer story, which might become longer yet, and which I hope you might read one day.

I find I ask ‘why?’, and ‘what if?’ a lot, and that one of my imaginings leads to lots of others.

The Writer in Residence was only a few days, but many of the imaginings will sit with me a good long while. Some of the ideas will come out quickly in stories, others, not so much. They will ferment like a wine, or a cheese, before they surface.

I imagine my own skull, viewed as something like a phrenology head, but with the sections detailing experiences, rather than personality traits.

And bones, and connections.

I imagine lots of those.

In 2022 it was our great pleasure to host Gympie author Janet Lee as our Writer in Residence as part of the AuRUM Festival.

Almost before Janet had set up her typewriter high school student and aspiring writer Misha Ahmadi arrived to chat with Janet. Together with her friend they sat and talked all things books, writing and literary inspiration.

Inspired by our display of the car crash fox, Misha has penned this piece of verse and sent it to us. We are pleased and proud to share this beautiful poem with you and look forward to seeing Misha grow and develop into another wonderful writer nurtured by the Gympie region.

Thank you, again, to Janet for generously sharing her time and expertise with our community during the AuRUM Festival.

Join the team from Gympie Bone Museum on Saturday

Spotted in Gympie cemetery this week. It's the fir

We got our faces in the local paper. Thanks @gympi

Long weekends are for family. We’re closed for E

This guy loves a party but he was exhausted by all

Did you catch Bilko and Jaimie on Zinc 96 this mor

BULL'S EYE FOOD TRUCK have come through for us aga

All the way from Poland, this fibre art exhibition

This piece has to be seen IRL to fully comprehend

Come and see what you'll look like later... And lo

Rusty the fox by Misha Ahmadi 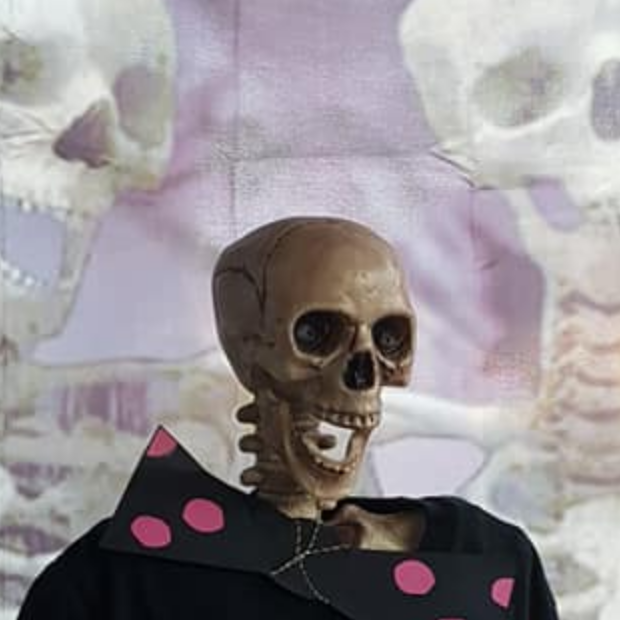